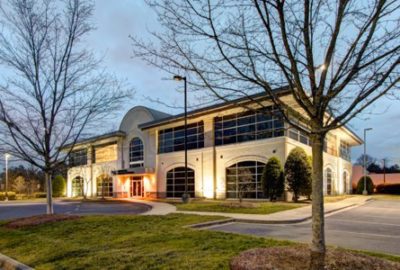 On October 12, Jannice and I flew to Charlotte, N.C. We were there for a denomination Board Meeting and to view the new headquarters. On Sunday morning, we attended a worship service where we witnessed the passing of the baton from our outgoing President Joseph Tkach to our new President Greg Williams. It was a wonderful service and I’d like to share some of the information that was presented with you.

We heard a testimony about Joe Sardler, a man who had been blind for six years. His blindness was caused by atrophy of the optical nerve. One night Joe tripped over his dog’s dish, which had been left on a step, and fell down the basement stairs. As he fell, his head slammed against a wall—and suddenly, miracle of miracles—his vison was restored. All of a sudden Joe could see things he hadn’t seen in years, including the face of his five-year-old daughter.

Try to imagine such an incident and how it made him feel. People kept asking him, “How did it happen, Joe?” Joe told them God did it. It was Joe’s firm belief that God used the dog dish, the basement stairs, and the wall to affect His miraculous healing. He gave God complete credit. What an amazing story!

Jannice and I enjoy asking our grandchildren about God‘s love. We sometimes ask them who made the trees, flowers, and other parts of God’s great creation.

We owe God complete credit for all that we are and everything that we have received, including salvation.

John tells us in chapter 3, verses 16 through 18: For God so loved the world that he gave his one and only son, that whoever believes in him shall not perish but have eternal life. For God did not send his son into the world to condemn the world, but to save the world through him. Whoever believes in him is not condemned, but whoever does not believe stands condemned already because they have not believed in the name of God’s one and only son. This is the verdict: Light has come into the world, but people loved darkness instead of light because their deeds were evil.

Verse 21: But whoever lives by the truth comes into the light, so that it may be seen plainly that what they have done has been done in the sight of God.

As we continue to be reconcilers, let’s remember that Jesus has reconciled us to the Father and to each other. May God keep and bless you. Love and peace. And let us continue to give God the credit.

I want to thank you all again for your support for ORM, helping us to spread the message of oneness.