Recently several pastors and others have asked questions about the background and purpose of the Office of Reconciliation and Spiritual Mediation (ORM). In this section, we would like to give you some background on the ministry.

The concept of reconciliation is not a 21st century idea. It started as a revolutionary concept started by Jesus Christ Himself – who is the Head of reconciliation. It’s all about Him. He died to make it possible for the broken creation to be reconciled to Him and the Father (Colossians 1:19-22); (Ephesians 2:14-18) – (already reconciled).

Therefore, ORM is a ministry that seeks to be used as an instrument to help fulfill the will of God “That they may be one as We are one” (John 17:21). ORM has an international office that includes 28-chapters in 5-countries: U.S.A., Ireland, England, Scotland and Canada.

As Christians, we have been given the ministry and gospel of reconciliation (2 Corinthians 5:16-21). We feel a burden and a special call to help fulfill this ministry. We feel a need to help Stand in the Gap with others who feel this burden and special calling (Ezekiel 22:30). This ministry, as most ministries, began in response to a need. We answered a request for personal assistance in resolving conflict within churches.

ORM officially began in January 1996. As expressed by the address of our website: ATimeToReconcile.org, we believe the time to reconcile is NOW!

As we look at the world, we are heart-broken over the divisions and walls that we see. And far too often, those walls exist within the church. We see the need for repentance now, “For the kingdom of God is at hand” (Matthew 3:1-2). Therefore, there are four-Faith Goals and seven-Key Result Areas that we are focusing on to become more effective in this ministry.

A Message from Mr. May

Today, it’s almost a cliche to say that we live in a divided world.

But that cliche won’t evaporate unless men and women, boys and girls, husbands and wives around the world are taught the principles of true, lasting reconciliation. That’s what ORM–the Office of Reconciliation and Spiritual Mediation–is all about.

For more than nineteen years now we have been conducting workshops, seminars, days of dialogue and mentoring and training sessions from our home base here in America to some of the most challenging trouble spots in the world. With the help of 28 Chapter Leaders from Ireland to Illinois we have been busy trying to live out the challenge contained in 2 Corinthians 5:18-19, “All this is from God, who reconciled us to himself through Christ and gave us the ministry of reconciliation.”

That is a tall order–to follow in the footsteps of the Ultimate Reconciler, Jesus Christ himself and we are humbled by the enormity of the task. Not that we limit ourselves to Christian endeavor. Though people such as Dr. Keith Phillips sits on our Advisory Board, we see reconciliation as an interfaith, multicultural agenda. We have been honored in the past to work with police chiefs, city planners, event specialists and capable Muslims, Hindus and members of the Ba’hai faith as well as agnostics, skeptics and others. The task of Reconciliation needs the best of what we have to offer from people of all backgrounds.

We have advanced this cause beyond our shores to international areas where men and women of various ethnicities and nationalities experience profound suffering at the hands of those who espouse racist and prejudicial views –this includes Catholic and Protestant Ireland, the Philippines and South Africa. On our team there is a nurse who has worked in Cambodia and Rwanda, pastors who have brought a help and healing message to the former Soviet Union and specialists in international development from Canada and Africa.

The Office of Reconciliation and Spiritual Mediation (ORM) was called into being more than thirteen years ago when racial tensions plagued some major American cities. With racial healing our main spearhead, we build upon the healthy Judaeo-Christian teaching that all men and women are made in God’s image. ORM is a ministry that seeks to be used as an instrument to help fulfill the will of God “that they may be one as we are one” (John 17:21). ORM ‘s international ministry now expanded to include 28 chapters in 5 countries: U.S.A., Ireland, England, Scotland and Canada.

We want to Stand in the Gap with others who feel this burden and call to reconcile. As we look at the world we are heart-broken over the divisions and walls that we see. And far too often those walls exist most bitterly within the Christian church. We see the need for repentance to begin at the house of God ( 1 Peter 4:17).

You may be pleased to know that my wife, Jannice May, directs a non-profit organization called Connecting & Bonding, a women’s ministry devoted exclusively to caring and encouraging ministers’ wives with some of the top, Christian female speakers in various conferences in the United States and international countries. For more information, please go to Connecting and Bonding website: www.connectingandbonding.org.

If you would like to know more about ORM or to access some of our helpful resources–videos, DVDs, lit packets, etc.–don’t hesitate to call us at 626- 590-0222 or by email: curtis.may@gci.org. 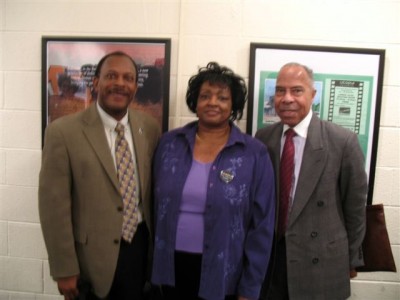 Curtis and Jannice May with Alex Haley’s brother, George W. Haley. He is the former Ambassador to the Republic of Gambia, home country of his ancestor Kunta Kinte. 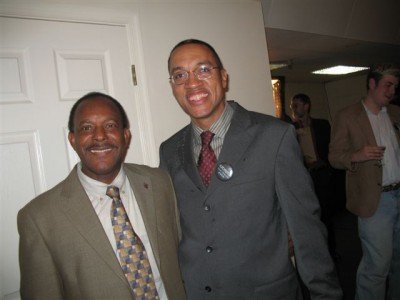 Curtis with Chris Haley, nephew of Alex Haley at the Utopia Film Festival. 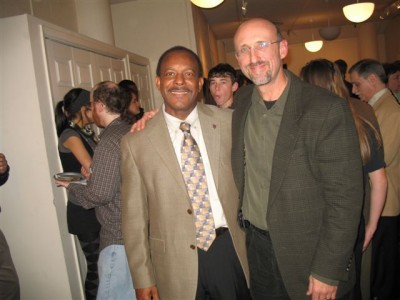 Curtis with “Yokes and Chains” movie producer Michael Lineau at the Utopia Film Festival where the Lifeline Expedition Film was entered. 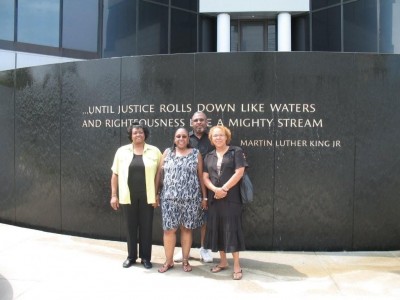 Jannice with Angela and Taylor Hooks and Annette Sweeting at the Civil Rights Memorial in Montgomery, AL.