Curtis May was born in Greensboro, Alabama in 1944.  After graduating from high school in 1963 as valedictorian, he moved to Brooklyn, New York.  From 1964 to 1967 Curtis worked at the Corrugated Printing Company as a printing machine operator while attending night school.  From 1967 to 1971 he worked as a clerk in the U.S. Postal Service in New York City.

He studied accounting at the Brooklyn Adult Vocational School in New York and attended Ambassador College in Pasadena, California in the early 70s.  There his focus was on Biblical Studies which led him into pastoral ministry upon completion of his studies.

Curtis May went on to work in pastoral ministry for 39 years.  He has served churches in Washington, D.C.; Baltimore, Maryland; Richmond and Norfolk, Virginia; Los Angeles and Pasadena, California.  He was District Superintendent of the U. S. Southwest District serving 30 churches in 7 states (from July 1995 until January 1, 2007) and is a member of the Board of Directors of Grace Communion International.  He also serves on the Board of Directors of African Enterprise and Connecting & Bonding, Inc. and is a member of the Pension Plan/Investment Committee of Grace Communion International.

Curtis’ wife, Jannice, is the Founder and President of Connecting and Bonding Inc., an organization that serves ministers’ wives.  The Mays have been married for 47 years and have 2  married children; Angela a CPA and Real Estate Agent and Bradley a Police Officer in the Pasadena Police Department. Bradley and Jeanine have 2 children, Jaden 5 and Bryce 1.

Curtis May has also majored in youth ministry.  He taught Bible and family relations classes at Imperial High School in the 1980s and 1990s and served as Director of the Summer Educational Program, Pasadena from 1992 to 1995.

Curtis has continued his theological, sociological and reconciliation education through in-service classes.  These valuable classes from such institutions as Pasadena City College,  Gordon/Cornwell University, Regent College, and the Biblical Research Institute,  have been very impactful on his effectiveness in his job as Director of Reconciliation Ministry. He was recently certified a second time in Mediation/Facilitation through UCLA, the Keystone Foundation and the Western Justice Center Foundation in Pasadena.

He is co-author of the book Mending Broken Relationships.

He received the "Telly Award" for the DVD, A Time to Reconcile.

In January 1996, Curtis founded the Office of Reconciliation and Spiritual Mediation (ORM).  He is editorial director of the ministry’s newsletter, Reconcile.  He has traveled to cities throughout the United States, Canada,  Africa, including South Africa, England, Northern and Southern Ireland, Scotland and the Philippines helping to organize and conduct reconciliation workshops.  He has received training at the Center for the Healing of Racism in Houston, Texas, and is a member of the Center.  He’s also a member of the International Reconciliation Coalition, and the Museum of Tolerance in Los Angeles.

In February 2002, Curtis May received the key to the city of Memphis, Tennessee, after conducting a workshop with city officials and religious leaders there.  He is currently helping conduct meetings with community and city leaders planning outreach events to help remove walls and build bridges between people. On June 7, 2006 he received the humanitarian Harry Sheldon Award presented by the Human Relations Commission for outstanding work of REMOVING WALLS AND BUILDING BRIDGES among people in the City of Pasadena.

The ministry of Reconciliation has 28 chapters in 5 countries: the United States, Canada, England, S. Ireland and Scotland.

Curtis attended the 200th anniversary of the abolition of the slave trade in Britain on March, 25, 2007, led by Lifeline Expedition (a ministry that has addressed the issues of the legacies of slavery for the last 7 years) as part of an audience with the Archbishop of Canterbury who apologized for the Church of England’s involvement in the slave trade. The apology took place on March 24. Lifeline Expedition, Anti-slavery Ministries, ORM and others received the apology. The Archbishop particularly wanted to apologize to descendents of slaves, slave owners, slave sellers and traders.

Lifeline is currently working on a movie about it called “Yokes and Chains.” They also make powerful DVDs for use in the grade school system. On one occasion Curtis met with Alex Haley’s brother, George, and two nephews, all descendants of Kunta Kinte.

Curtis was invited by Director Bernard Melekian to take part in a Reconciliation and Police Legitimacy Summit at the U S Department of Justice’s Community Oriented Policing Office on January 10-11, 2012. On the first day he conducted a 2-hour session on Reconciliation with a predominately African American audience which included some top COPS Office leaders. And on the second day he participated in an 8- hour Summit on Reconciliation and Police Legitimacy which included a number of Chiefs of Police, COPS leaders, Pastors, Community Development Leaders and others. He spoke and fielded questions for an hour and served as a panelist the rest of the time. Director Melekian said he heard a lot of good feedback and agreed with it. 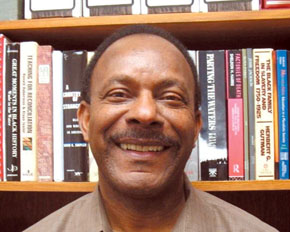