Marching in Colorado; Meeting in Missouri 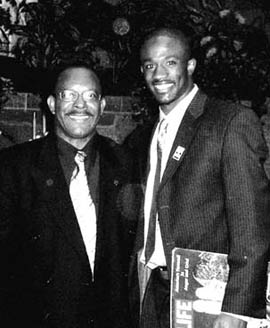 The next day Curtis May was guest for a live interview on Channel 7 TV about that evening’s Candlelight Walk from the Arvada United Methodist Church. About 105 people walked in the 25 degree weather to the Performing Arts Center to hear Mr. May expound upon the life and death of Martin Luther King, Jr. The assembly later heard from local city leaders, including the Mayor Pro-Tem, and Denver Bronco’s Cornerback Dominique Foxworth. “Arvada has a fascinating record in the ethnic wars,” Curtis May reports. “In the 1920s the KKK was strong in Colorado. They were targeting Arvada Catholics, Jews, immigrants and blacks as a national threat. After the Women’ Order of the KKK burned a cross in front of St. Anne’s Catholic Church, the church retaliated with a 10,000 men and boys’ march in support of the undesirables. lan soon faded from view in this part of Colorado.”

Interdenominationalism was also on display in St. Louis, Missouri, according to ORM chapter leader, Pam Harris. Noting that the congregation shared a hall with a Chinese Baptist group, she invited Pastor Wong to join a 2006 Multicultural Bazaar. “We learned that many of the Chinese believers didn’t respond to our hellos because they felt their English was inadequate. The combined event gave us a chance to talk and interact. The local Anglican Church provided food from different cultures for the occasion,” added Harris. “We’ve definitely softened some denominational barriers in St. Louis,” she concluded.

In a year of national tensions over immigration, these reconcilers live out the truth of the Chinese proverb: “The longest journey begins with a single step.”