Pastor Karl Reinagel and his wife, Carla have been serving as ORM leaders for several years. I asked him to share some of the things he’s been doing to promote reconciliation in his area, Furguson, Missouri.

Jesus Christ has been equipping New Creation in Christ for racial reconciliation since Curtis and Jannice May held a racial reconciliation workshop here in St. Louis in 2003. Our small, diverse congregation reached out to Ferguson in the wake of the tragic death of Michael Brown on August 9, 2014, and the destructive aftermath. We began meeting there for worship in November 2015. 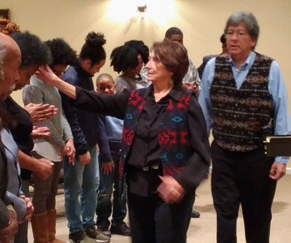 This January we began a workshop series, “Overcoming the Victim Spirit,” to equip members and residents of Ferguson to walk in greater freedom. This training is led by Ivan Doxtator (MSW), founder, President and Director of First Nations Restoration Ministries (FNRM) (www.firstnationsrestoration.org) and his wife Linda (PhD, LPC, LCPC). FNRM is dedicated to bringing wholeness to the body of Christ. They state their “ultimate purpose is to see individuals, families and communities achieve their God-given potential.” The Doxtators are partnering with us to bring hope, healing and transformation to Ferguson.

The workshops address the Biblical Basis for the Victim Spirit, discerning when the Victim Spirit is operating, how to move from bondage to victory, the abuse and trauma associated with the Victim Spirit and much more. They are held Saturday mornings, followed by a potluck meal. Participants say the information is helpful and relevant in equipping them to walk more in the freedom of Christ and to help others to do the same.

During Black History Month, we asked Ivan and Linda to offer a Native American blessing to members and guests who gathered Sunday, February 18. Ivan quoted Acts 17:26, “And He has made from one blood every nation of men to dwell on all the face of the earth, and has determined their pre-appointed times and the boundaries of their dwellings” (NKJV). He explained that he and Linda, as Native Americans, are part of the host peoples appointed to steward this land prior to the immigration that began from Europe. Ivan’s roots come from here in the heartland.

As divinely-ordained host people (Acts 17:26 and Deut. 32:8), they then invited participants to the front of the sanctuary. Everyone eagerly accepted the invitation. We then took a “prophetic step” forward as if stepping onto North American soil for the first time. Ivan spoke words of blessing to the group while Linda anointed and prayed over each individual. It was a very moving time in the Lord’s presence.

We thank God for this partnership with FNRM and the healing that is coming here in Ferguson as a result. All glory to Him!