The other day, my wife, Jannice and I were watching the end of a very tight football game between the Green Bay Packers and the Chicago Bears. In fact, the Bears were near a victory when the Packers’ quarterback Aaron Rodgers got injured, just when they needed him most! But to the amazement of the Packers, after a time out was called, out came Aaron Rodgers with a bandage on his arm, asking for the ball! To make a long story short, the Packers beat the Bears 24 to 23! They had a real leader – Aaron Rodgers.

Jannice and I cheered at such a powerful victory! She instantly suggested that this game would serve as a great introduction in a Reconciliation letter. There are numerous examples of valor in the Bible, with men of God fighting against the enemies of ancient Israel. Israel won when they looked to God for help! 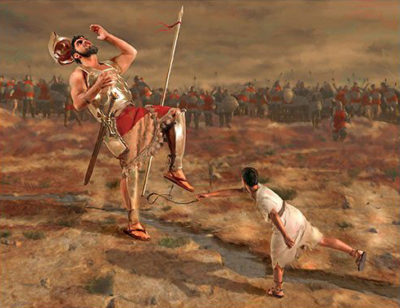 Instantly, I think of David, the king of Israel and a man after God’s own heart. Reflecting upon his incredible defeat over Goliath, David was a masterful leader!

How do you handle your Goliaths and other giants? Giants such as illness or lacking the finances to pay the bills? What about noisy, rowdy neighbors, or a host of other things that aggravate us? Do you have that instinct as a leader?

We are told in the scriptures in Psalm 46:1-3,7:
God is our refuge and strength, an ever- present help in trouble.
Therefore we will not fear, though the earth give way and the mountains fall into the heart of the sea,
though its waters roar and foam and the mountains quake with their surging.
The Lord our God is with us; the God of Jacob is our fortress.

My Sisters and Brothers in Christ, isn’t it great to know that we are in the hands of God our Father and Jesus, our Lord and Savior? And, like Israel, when we look to God the Father and Jesus our Savior who gave His life for ours, we need not live in fear of anything! Because of this, we, as God’s servants, can be Great Leaders.

Therefore, we have all we need to get us through any circumstance that we may encounter. Nothing is too hard or difficult because Jesus and the Father are delighted to hear our prayers. God understands all of the circumstances in our lives because we are His dear children!